Starting point: loincloth
In prehistoric times, men would wear what we now call a loincloth made of leather to protect themselves from nature. The Egyptian Pharaoh wore them. Scots wear short kilts, which became the standard outfit for all men (and women) during the day. 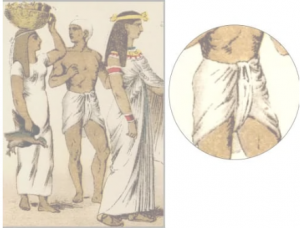 Over time, underwear evolved into a second garment that was worn under clothing. Wearing underwear decreased the amount of time needed launder trousers and outerwear. Additionally, it was less protective and less expensive to replace than a pair of pants.

at the time, trousers were tied using a form of lace at both the waist and the ankles. It was difficult to quickly remove them due to the hassle of having to undo all the laces. That’s how the codpiece came to be.

It was a type of clothing that utilized front buttons or laces which permitted men to urinate without having to take off their trousers. King Henry VIII adorned his codpieces with various decorations for show and padding for comfort. The popularity of padding a codpiece declined in the 1500s.

As underwear continued to develop, men began wearing tight knee-length flannel union suit that matched their shirts. It wasn’t until the mid-1920s that a boxing company called Everlast began to tweak their leather trunks worn by prize fighters opting for something more comfortable with an elastic band. From this invention came the beginning of boxer shorts. Despite this level of ingenuity, men didn’t appreciate the modern boxer and preferred the support (and warmth, pre-central heating) offered by the union suit.

Then, in 1934, a man by the name of Arthur Kneibler, a senior executive at Coopers, Inc, a hosiery company, received a telegram from a close friend in France. The picture on the front of the postcard was a man wearing a small bikini-style swim suit. This triggered the imagination of Kneibler who immediately realized that this type of apparel could be worn by men as underwear. He then created what he would eventually name “Jockey shorts”. He chose the name because of the similar support that an athletic cup offered.

By 1935, Marshall Fields department store in Chicago began carrying the newly developed jockey shorts and despite the horrendously inclement weather, they sold out by the end of the first day. This also gave way to men opting to re-try the boxer shorts developed some years earlier and by the end of the 1940s, both boxer shorts and briefs were the regular style worn by men instead of the traditional union suits.